Back in the Summer of 2019, long before the world had even heard of something called Covid, I had a crack at the South Downs Way Double. The challenge is to ride the length of the South Downs Way, there and back,  in 24hrs. That's 200 miles off-road with 22,000ft of climbing. On that June day in 2019 I was defeated by the weather, when unforecast rain pushed in. I'd been riding for 15 hours and was heading into the night, so another 9 hours without any suitable clothing would have been foolish. The "Double" had been playing on my mind ever since.

2022 was the chance to get this monkey off my back. I picked a weekend around the summer equinox in June to maximise the daylight, I loaded my bike and hit the National trail as the sun was setting. 17 hours later battling rain and 40mph winds I was forced to bail again.

Now a full blown obsession, there was going to be a 3rd attempt and I wasn't going to wait another 3 years!

I had taken some lessons from my previous experiences. The most important obviously was to watch the weather forecast, but also I am not as fit now as I had been in 2019. Completing the ride in 24hrs was going to be a serious challenge. I'd be racing the clock the entire way. 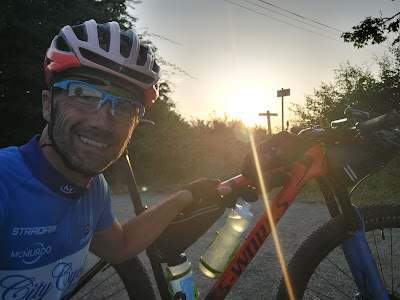 As before I started at Cocking, the nearest point on the South Downs Way to where I live in Chichester. Having tried different start times I decided I preferred to get a good nights sleep and ride out early in the morning. So at 6am, with the rising sun in my face, I set off East across the chalky ridge of hills called the South Downs. Why East? Two reasons. This is definitely the tougher part of the ride, with big climbs from almost sea level as you approach Eastbourne. Best therefore to get it done with fresher legs. Also, if all went to plan, I'd get back to Cocking at Sunset splitting the ride nicely into daylight and night sections, with a chance to re-kit myself at the car.

I'd chosen this Sunday as the forecast was for the recent bone dry weather to continue for days to come. There was actually a warning for high temperatures, but up on the grassy ridge line there was a comforting onshore breeze. Being a weekend I passed a lot of walkers, but at least this meant I got some help with a few of the many gates. The day progressed well, and I made it to Eastbourne in about the 8 hours I needed to keep my attempt on schedule. On the way I munched on bananas, fig rolls and peanut Clif Bars, but as I've also learnt my tastes change during the ride; from sweet to savoury. So in the afternoon I began to add slices of pizza to my diet as well as a packet of Hula Hoops! I don't know how many bottles of water I drank but it must be dozens. Given the heat warning I took two bottles. I could probably have got away with one, refilling at the regular taps, but if one tap had been out of order I would have struggled as each time I rolled up with two empty bidons on the bike.

I knew it was likely I'd get a puncture given the flinty nature of the ground. Weirdly I'd just been thinking about it as I heard the psst, psst, psst. I was close to Chanctonbury ring on the way back towards Cocking. Luckily a quick Dart sealed the hole and I probably lost only a minute or two before I was back on my way.

I'd had a headwind in the morning, but now heading West, with the wind on my back I felt a million dollars. I was now gaining time on schedule and feeling positive although obviously after 14 hours I was beginning to feel tired. Which is probably why I ended up on my face in the dust! It is funny how your mind has time to think "I don't want my attempt to end like this" as I flew through the air. I had been looking ahead as I approached what felt like the millionth gate. The front wheel got caught in a rut and I was thrown to the ground, in a dusty heap at the top of Amberley Mount.

I'd been racing the clock, so instinctively leapt back on and rolled down to the gate. Reaching for the brake, I found the lever was broken and it had also left a nice mark on my top tube where it had swung round. After a minute with the allen keys getting everything at least usable again and I rode down the almost vertical face of the hill to the road. I'd been cracking on and hadn't messaged anybody with my progress since Eastbourne so reached for my phone. It wasn't in my pocket!

What did I do now? My first thought was to leave it and crack on, but my family were using the Life360 app to monitor my progress. If I just left it, they'd think I'd died on the hillside and send out a search partly. Also as I started to think more rationally - it is my phone and all the things that go with it in a modern world. It seemed likely it had slipped out of my pocket during the fall, but that was right back at the very top of Amberley Mount! Of all the hills I wouldn't want to ride twice! I pedalled to the bottom of the steepest section and then ran/jogged/staggered up to the gate. I couldn't remember exactly where I had fallen, but luckily a bright orange gel wrapper marked the spot, and next to it there was my phone.

Crisis averted, but I'd lost over 20 minutes before I was back down at the road where I had first noticed my empty pocket. Full of frustration and anger I pushed on up the next few climbs past Bignor and was soon on familiar trails and descending back down to the car.

About 16 hours had passed and the sun had set, but the sky was still light enough for me to see what I was doing as I fitted my lights, restocked my bags and changed into fresh, warmer kit in preparation for the final night leg. I knew that if I rode it at the same speed as I had during my previous attempt I'd just squeak inside 24 hours, but previously I'd ridden the night leg first, I now had 120 miles in the legs and would certainly be slower. Wouldn't I?

I was still feeling good as I set off and feeling motivated. It wasn't until I reached the base of the grassy climb at Butser that I felt the first weakness hit me. From fairly close to the bottom I got off and walked. I was startled by the silhouette of two ladies with a telescope as I staggered to the top. Their outline was illuminated by a flash of lightning. Then came a roll of thunder and I felt the first large drops of summer rain on my back. It seemed all my attempts were cursed by bad luck with weather. A quick check of my phone said 0% chance of rain, so I hoped it was just an isolated shower and pushed on into the dark.

As I reached East Meon lightning kept illuminating the dark shapes of the hillside around me and the thunder grew menacingly loud. At the base of the climb I sheltered under a tree cursing my luck as it began to rain properly. How could I be this unlucky? Surely it is possible to get 24 hours in the UK without it raining? I had a choice but staying under the tree wasn't one of them and it was costing me time, so I got back in the saddle and rode on. The consistent drip, drip continued all the way to Winchester. Luckily the ground was so dry that it made little difference to the track beneath my wheels.

It wasn't until I reached the streets of the city that the heavens really opened, the rain beating on the tarmac and running down the sides of the road in torrents. I was soaked, but now only the homeward leg remained.

It wasn't cold at 16 degrees, but the night air had a chill and in my wet clothes I started to shiver. With chattering teeth, doubts began to enter my mind. Even if I did stop though, who'd I call at 3am and it would be at least an hour until they could get me. Having come this far, my best option was to rescue myself by getting back to the car. I tried to warm myself up by putting what little effort I had left into the climbs, but my body temperature would plummet again on the way back down the other side.

The gates were the worst part. Having to stop, unclip and unfold my tired body to walk through, close the latch them and then remount. Arrgh! I kept thinking to myself I should have left them all open on the way out, as I'm sure nobody had gone through them since I had earlier in the night!

Eventually I forgot about the cold. I think this was largely physiological, because I started to realise I was going to make it! The sky lightened and the sun was in the sky as I hit the final major uphill section. I was riding familiar trails again and knew I would be back by 6am even if I had to walk it, but I didn't! I'll admit I was struggling to stay awake for those last few miles. The head was nodding, as I suddenly came round with a jolt. Luckily I stayed on the bike and was fully focused for the final plunge down to the car, stopping the clock at 23hrs 30min 25sec. I'd done it! 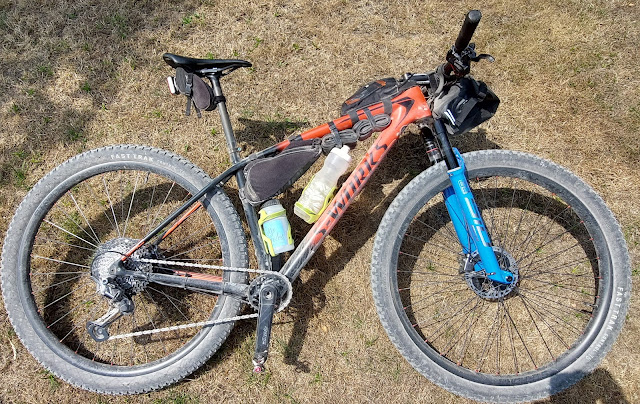